There’s nothing like a warming soup that’s packed with flavor. Coconut milk, sweet potatoes, spices and ginger, make this my ultimate go to fall soup. It’s vegan, paleo and whole 30 too! 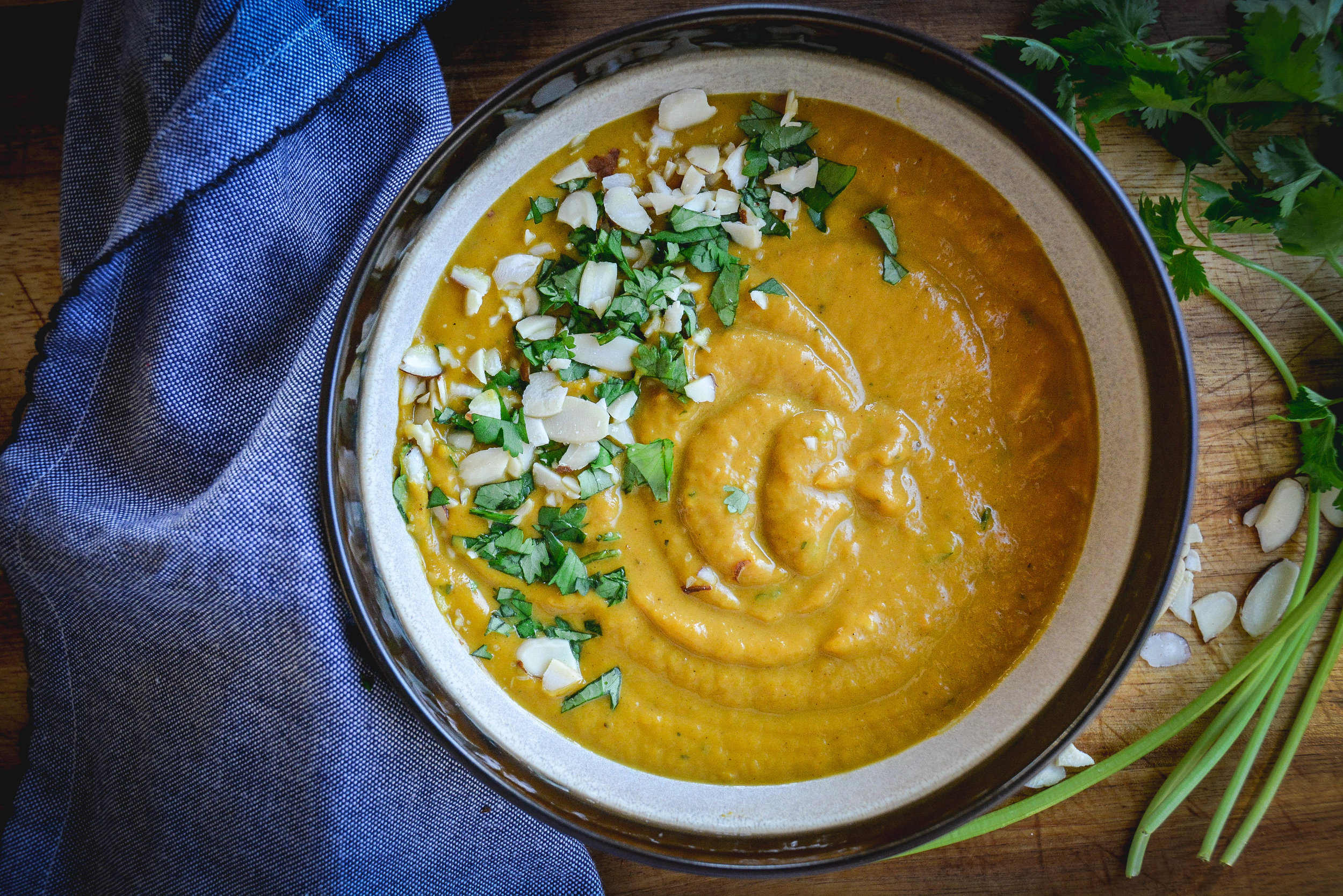 Sunday is my cooking day. I generally try to take a good chunk of the day and focus on making at least one recipe, get a shoot in and maybe if I’m lucky even get some editing and writing in. My plan was to work on a coconut cilantro sweet potato soup. That was until my kids decided to re-write how my day would go. As a parent, I’ve learned to roll with things as much as I possibly can. I used to get pretty frustrated when things didn’t work out as I’d hoped but I’m slowly learning that it will not get me anywhere.

Something I have been thinking about lately is my sense of self. When I was young, I had this idea of who I was, what I liked and what defined me. Admittedly I also thought it was something unwavering. I suppose it was a naive way of thinking as I now believe that experiences can shape us. I’m not the woman I was 10 years ago and will not be who I am today, 10 years from now.

One thing that proved my identity to be fluid and far from fixed, was having children. You see, before I was a parent, I didn’t really understand kids. Not that I didn’t like them, but had no exposure to them. Then came the day I found out I was pregnant. All experiences up until that point just moved past me and while significant in their own way, they just skimmed the surface. The moment I learned I was carrying a human being inside me, my sense of self became rocky. I went through weeks and weeks of not just relentless nausea but constant questioning and wondering how I was supposed to fit into this role that changed me in the blink of an eye. I’m sure if you’re a parent, you can probably relate to having experienced something similar.

Then came the actual parenting part, which is as much humbling as it is trying. Being a parent has forced me to put on hold my selfish tendencies, at least in some respect. As much as I hate admitting it, on most days, I’m at the mercy of my kids. Using rational thought and persuasion does not work on a 18 month old and a 4.5 year old. I’m forced to bend and twist in all sorts of ways in order to get actual adult stuff done.

But once in a while I’m caught off guard when my son runs for his step stool, parks it next to me and says: “I’m going to help you cook, mama”. If only for a brief moment it feels like my adult self and my mother self can coexist and be one. So little hands, busy peeling sweet potatoes, helped to make soup.

The idea for it came from the broth of a curry I’d made. The combination of flavors was spot on. So I decided to take those flavors and turn them into a soup. It’s by far one of my favorites and not just because it’s sweet potato but because it has coconut milk in it. And if there’s one food that brings me to my knees, it is coconut. It’s simply spectacular in my book.

This recipe is uncomplicated and if you’re a spice lover, you’re probably already sitting on a most of these. All you need for this soup are sweet potatoes, coconut milk, onion, broth, spices and cilantro. I have most of these ingredients on hand at all times, so it’s a great one to whip up when you want a warming lunch.

I’m always a fan of simple and believe wholeheartedly that often uncomplicated recipes will be sustainable and you’ll want to make them over and over. Here are some thoughts on making the perfect soup.

Yams and sweet potatoes are often used interchangeably but I find the orange sweet potatoes to be ideal in this recipe. If you can get your hands on Jewel sweet potatoes, even better. I also recommend using organic as they taste significantly better.

Make sure your sweet potatoes are cut in small cubes to they boil quickly and are very soft before blending, otherwise you’ll end up with hard pieces.

What coconut milk works best in for the sweet potato soup?

I find full fat to be the best and only coconut milk I use. Lite coconut milk will be watery and won’t give you the creamy, rich consistency that works so well in this soup. As far as brands, that’s entirely up to you but I find organic with the least amount of additives to be best.

Does the broth matter?

Not really as long as you use a quality broth that’s not full sodium. I like to go low sodium whenever possible and adjust the salt myself. I find the salt in regular sodium to be far too intense for this soup and cutting into the natural sweetness of the potatoes and coconut too much.

Can I use a different nut if I don’t like almonds?

Absolutely! You could use roasted crushed cashews, roasted pumpkin or sunflower seeds or really any other nut or see you enjoy as a crunchy topping for soup.

Now let’s get to the recipe! 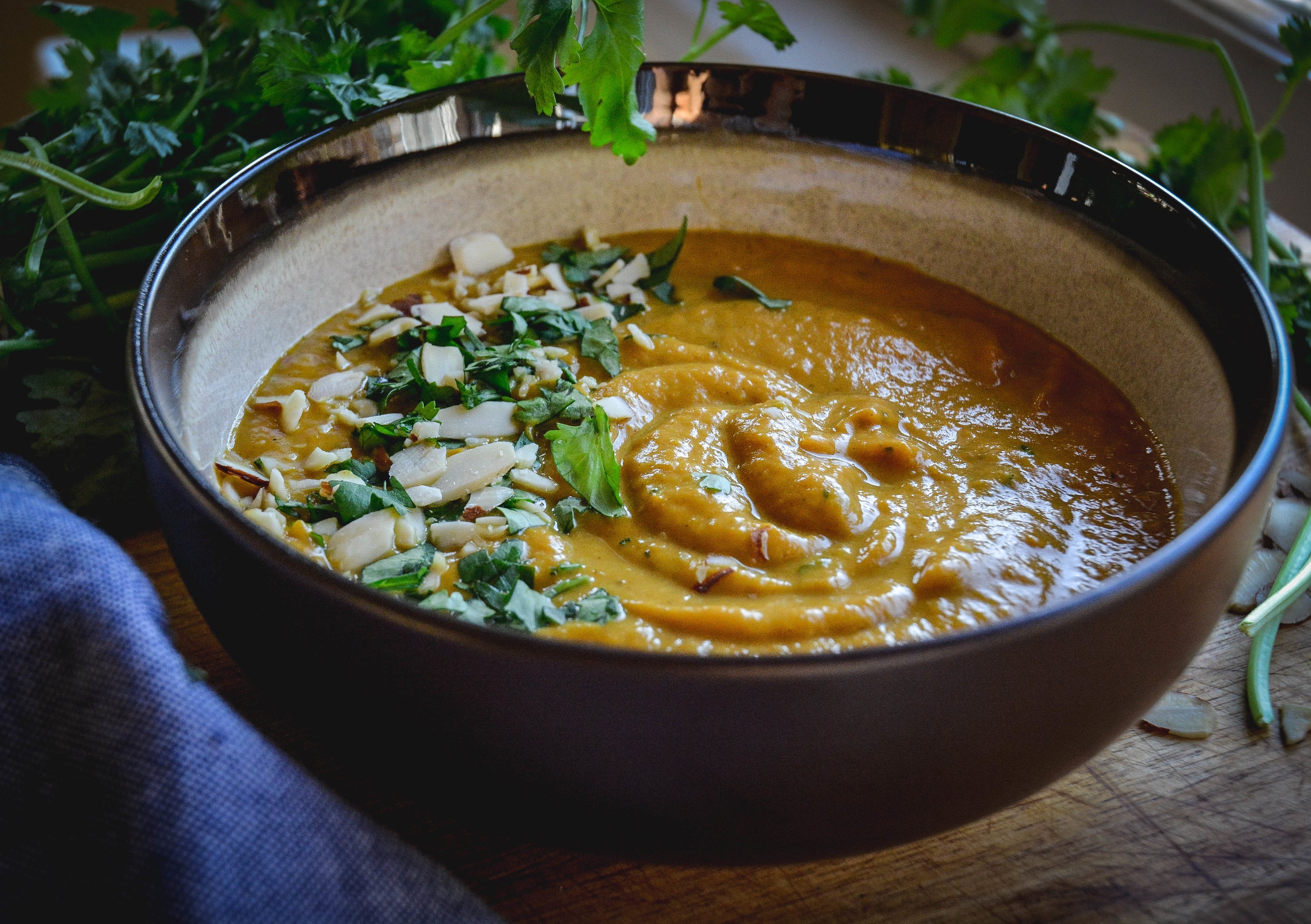 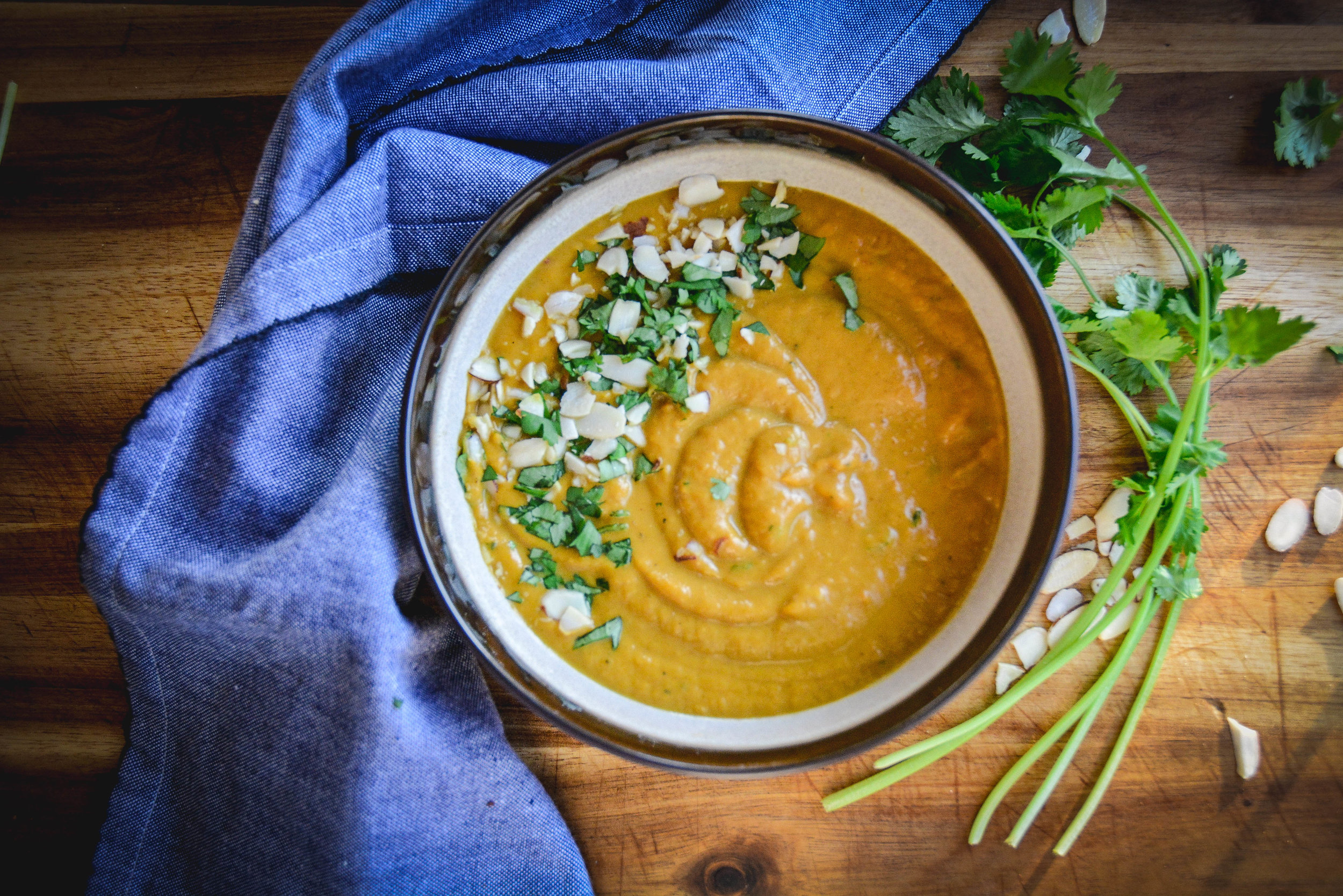 Once sweet potatoes are soft, add coconut milk and chopped cilantro. Let cool for a few minutes before adding to food processor.

Once pureed, you can serve with additional cilantro and almond slices. 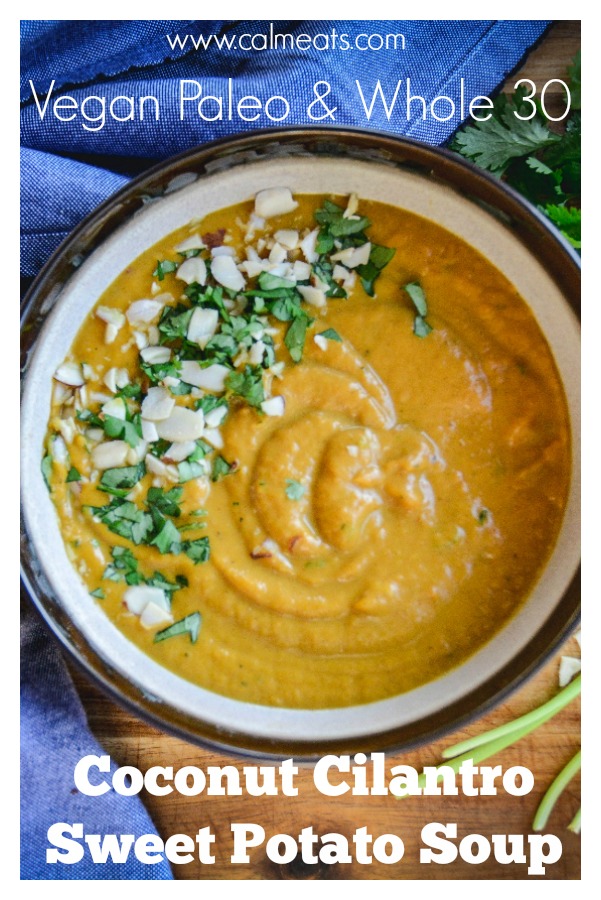 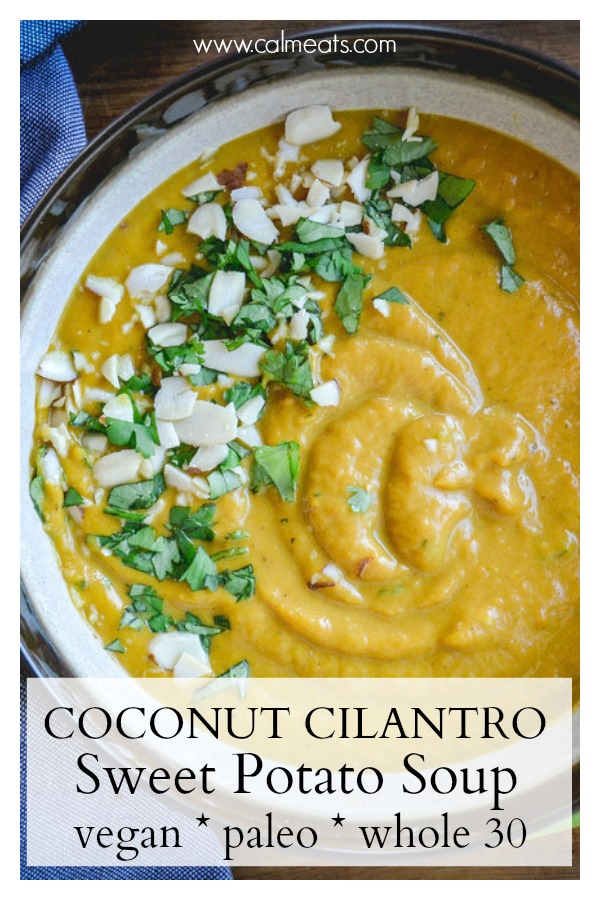 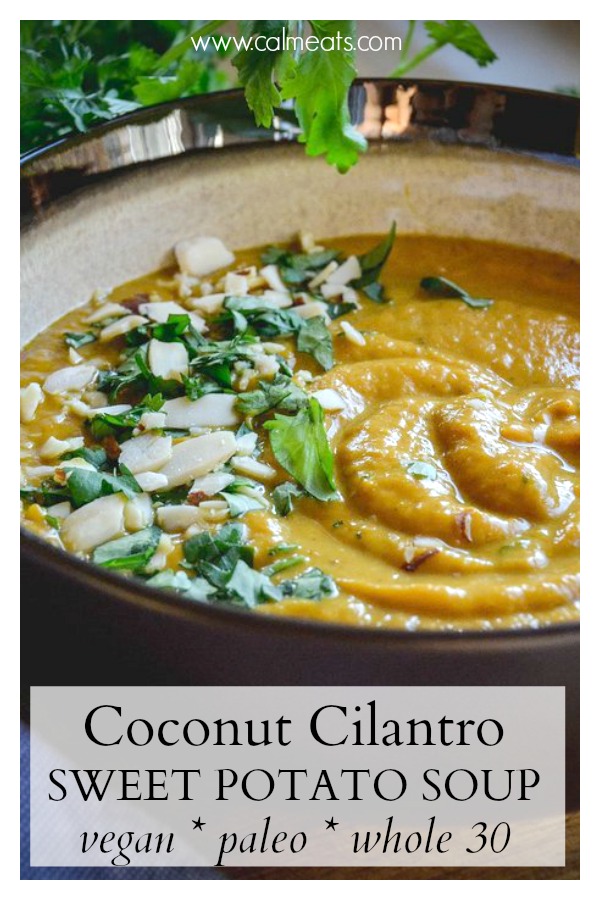 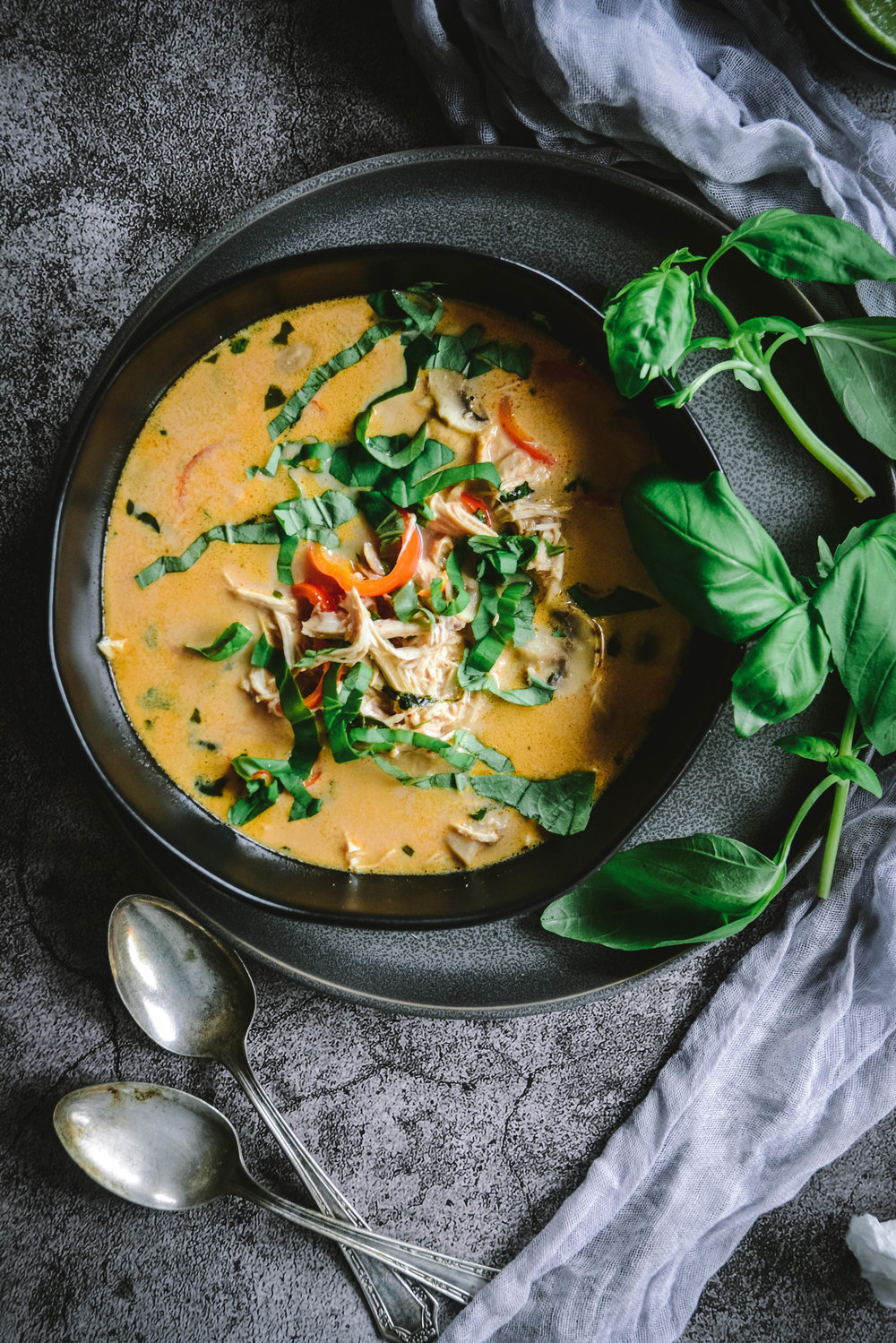 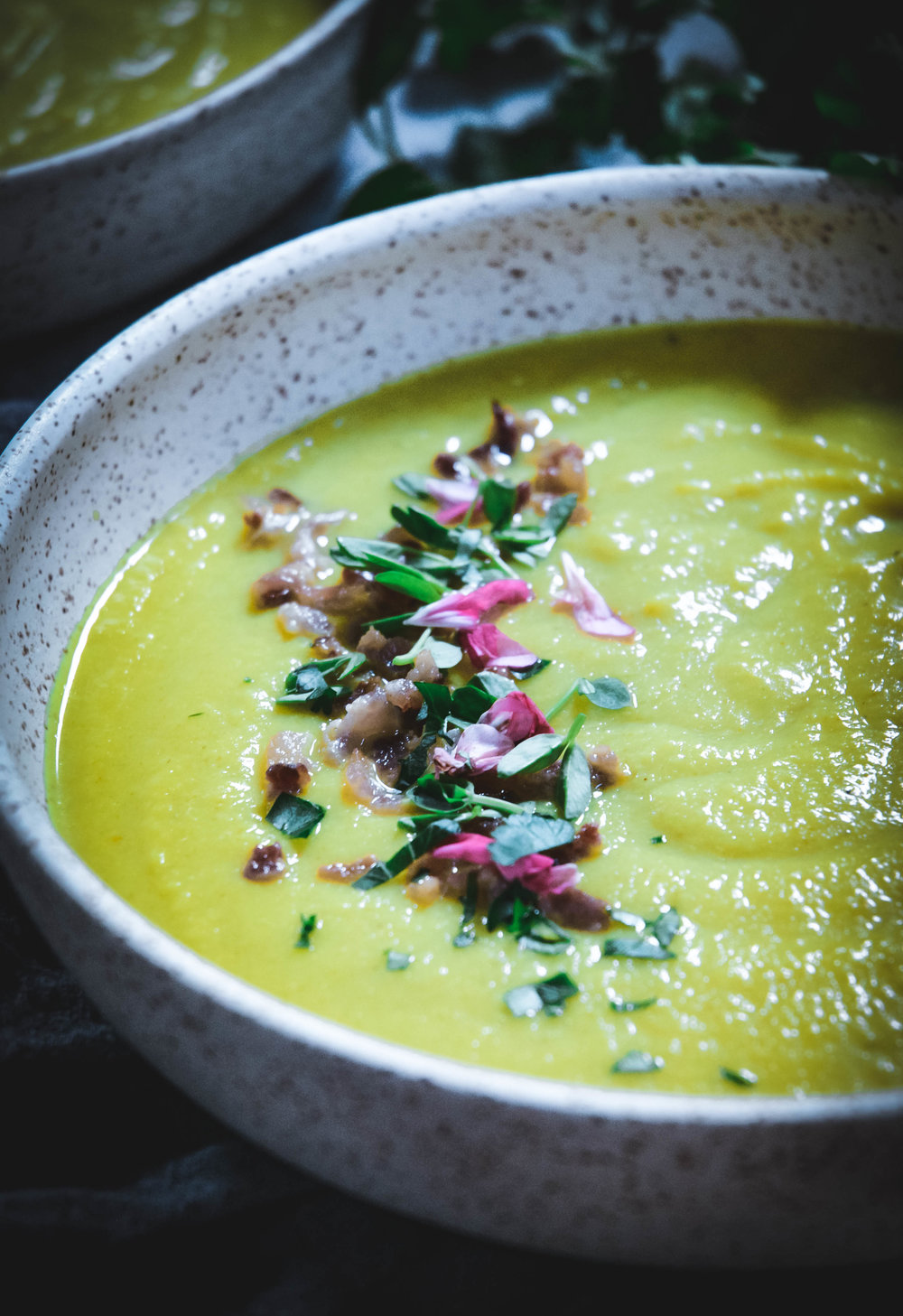 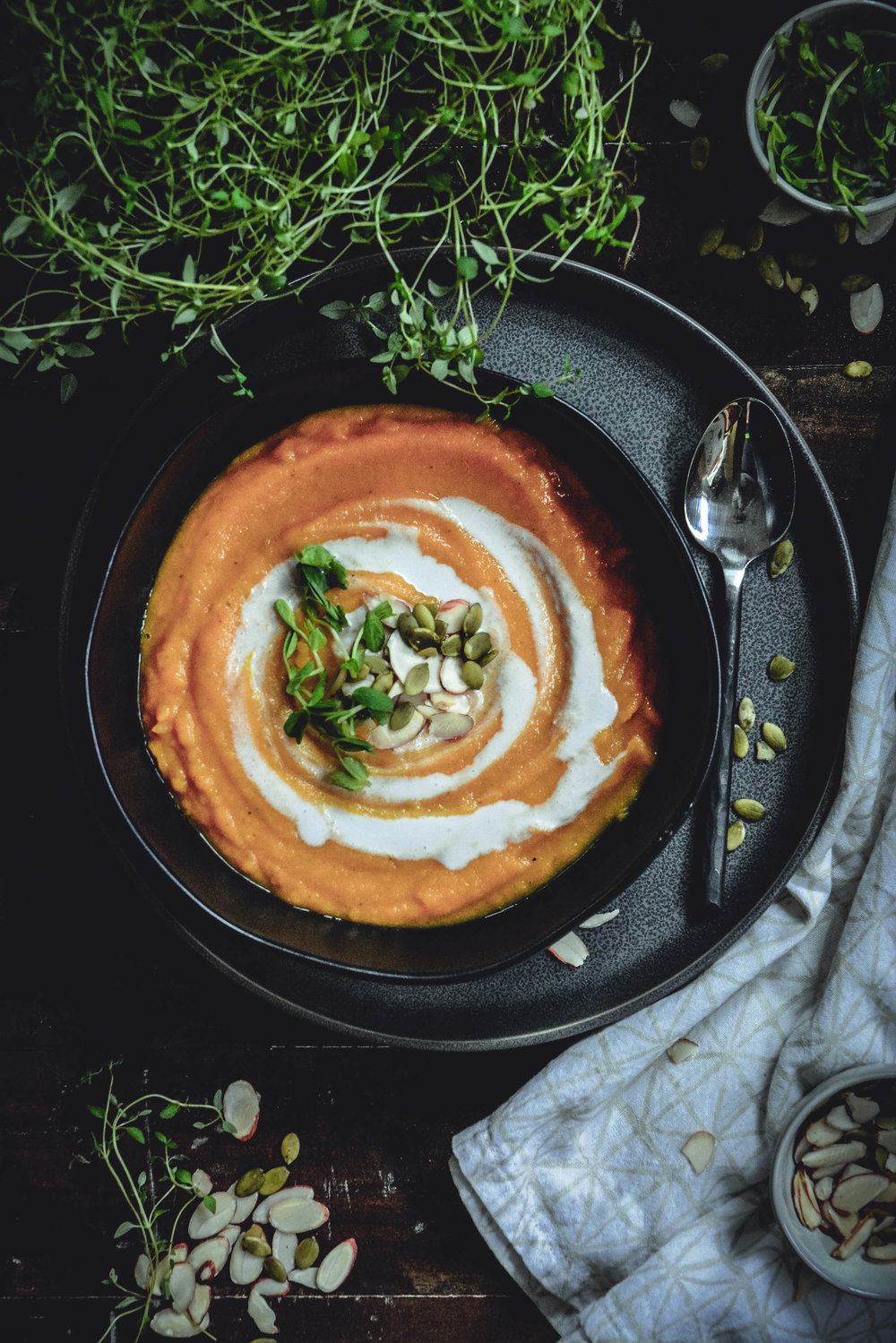