Some foods simply belong together. This one pan Greek lemon chicken with baby potatoes dish is easy to make and requires hardly any clean up. Everything is transferred from stove top to oven and you will end up with moist, tender chicken and flavorful lemony potatoes. 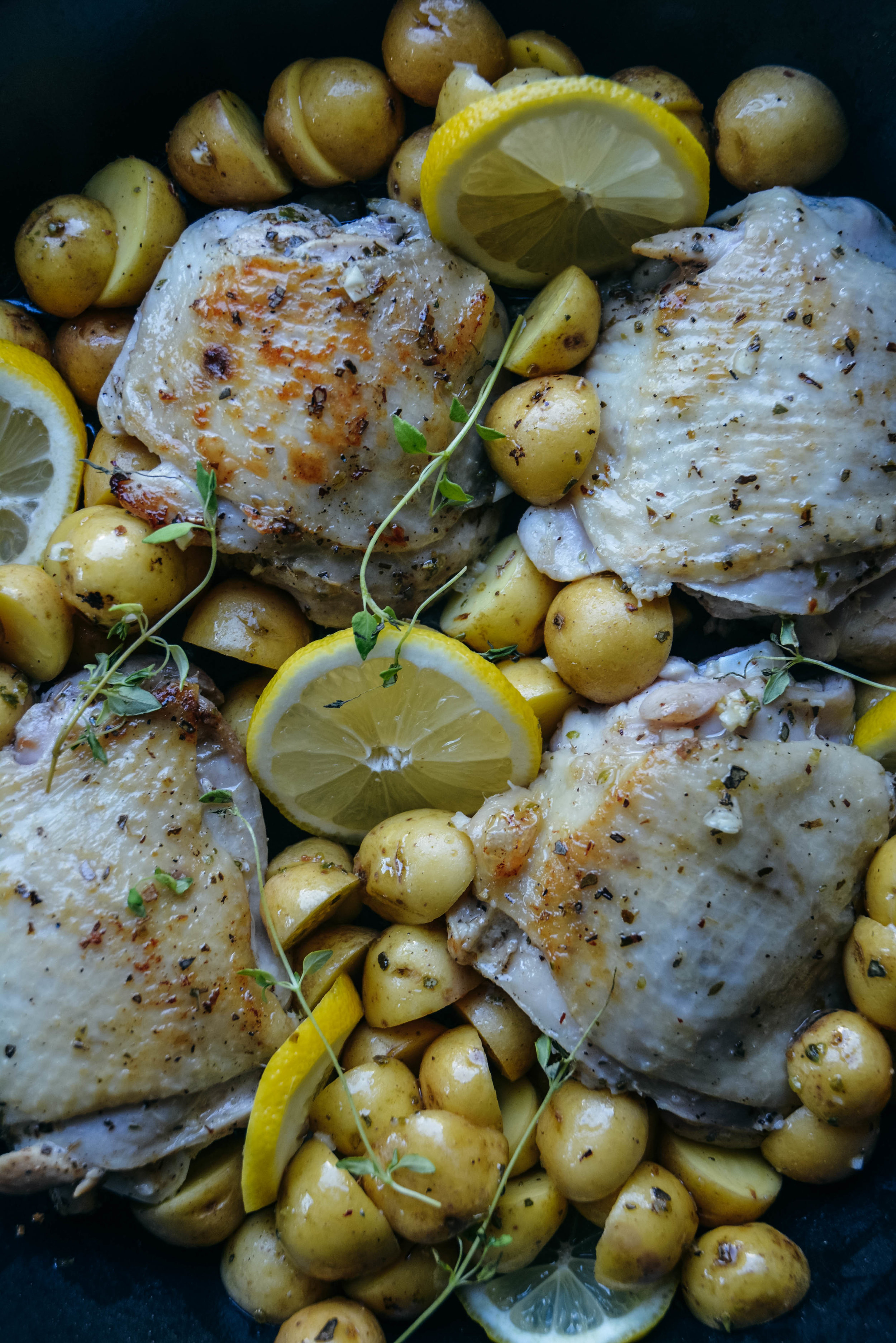 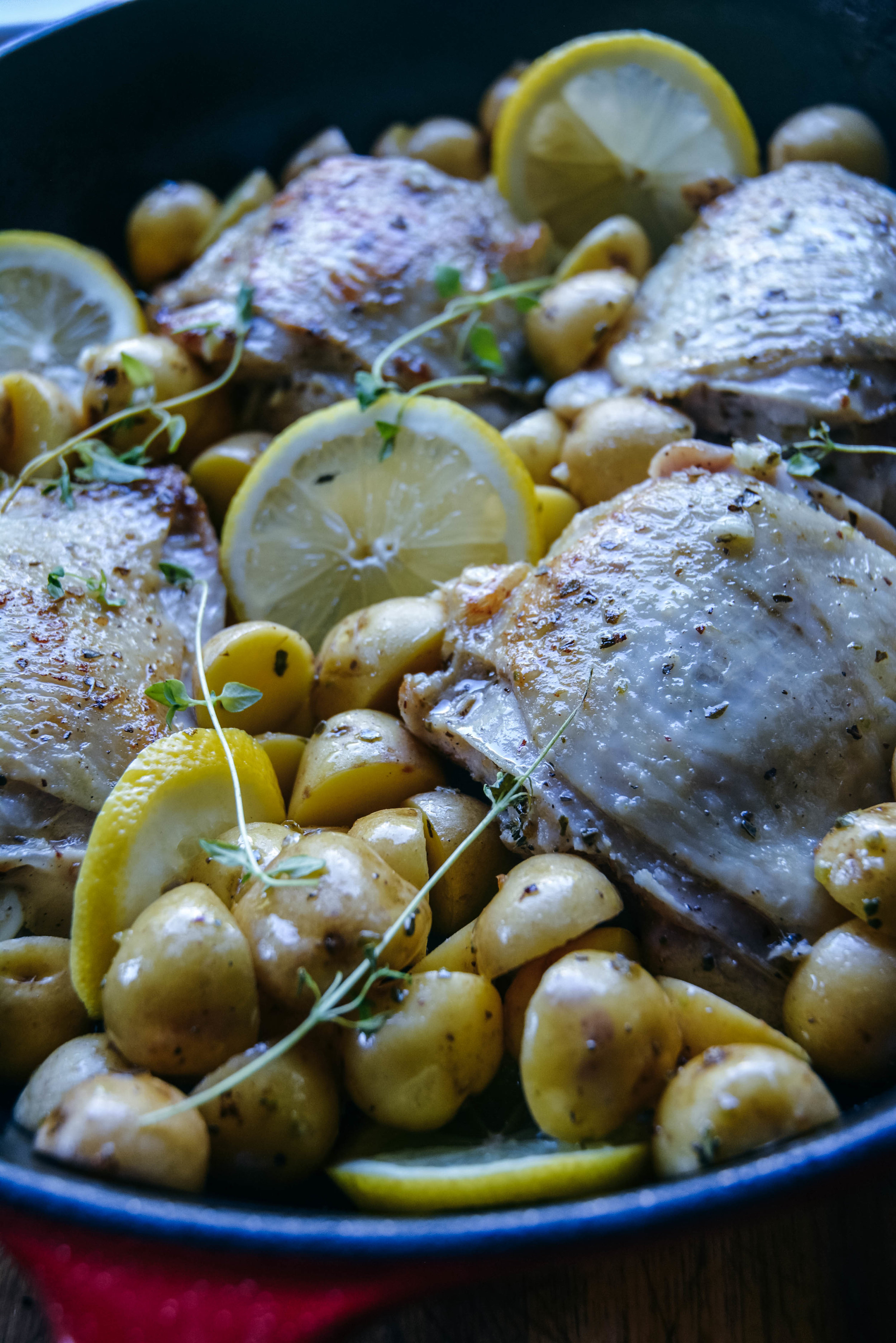 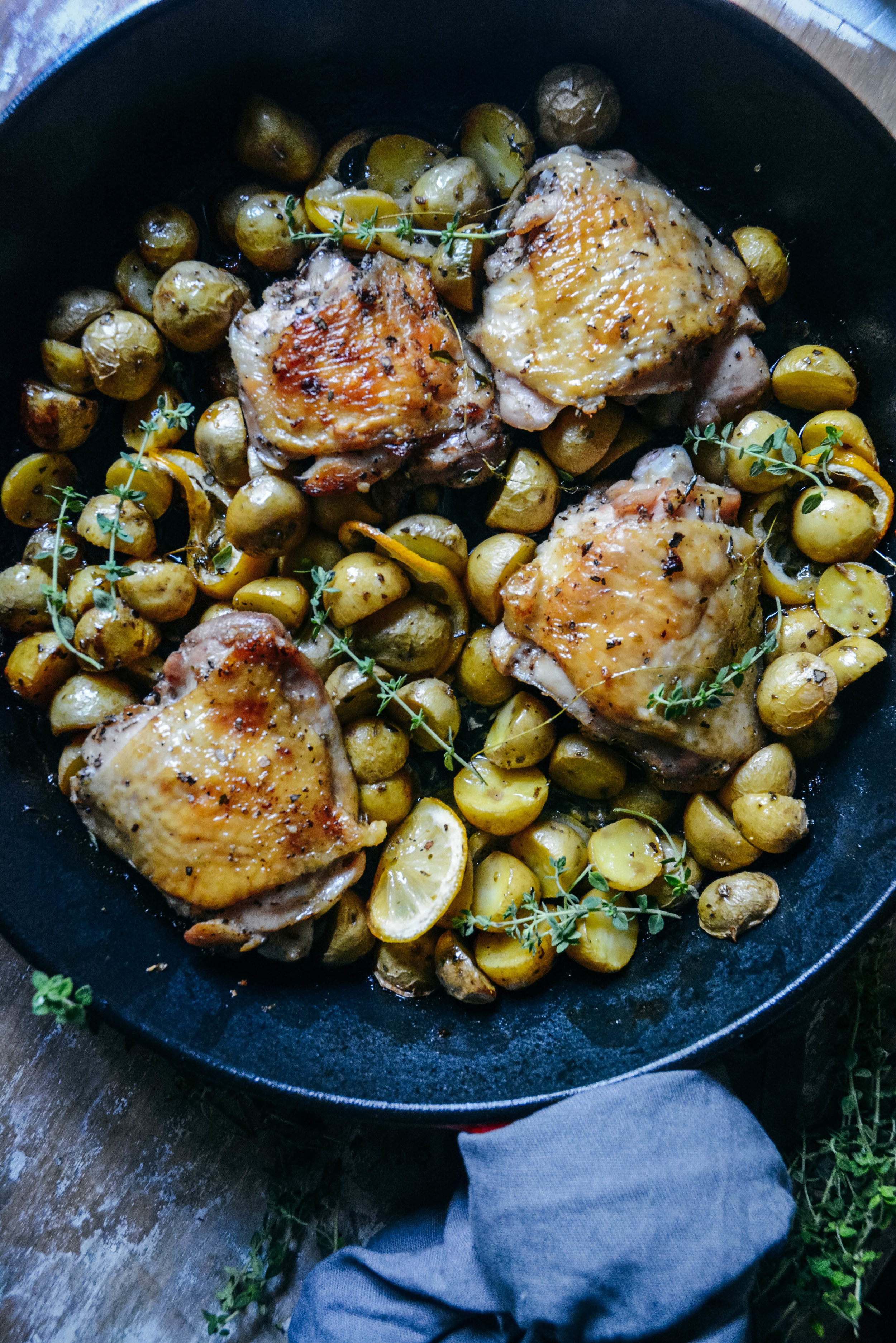 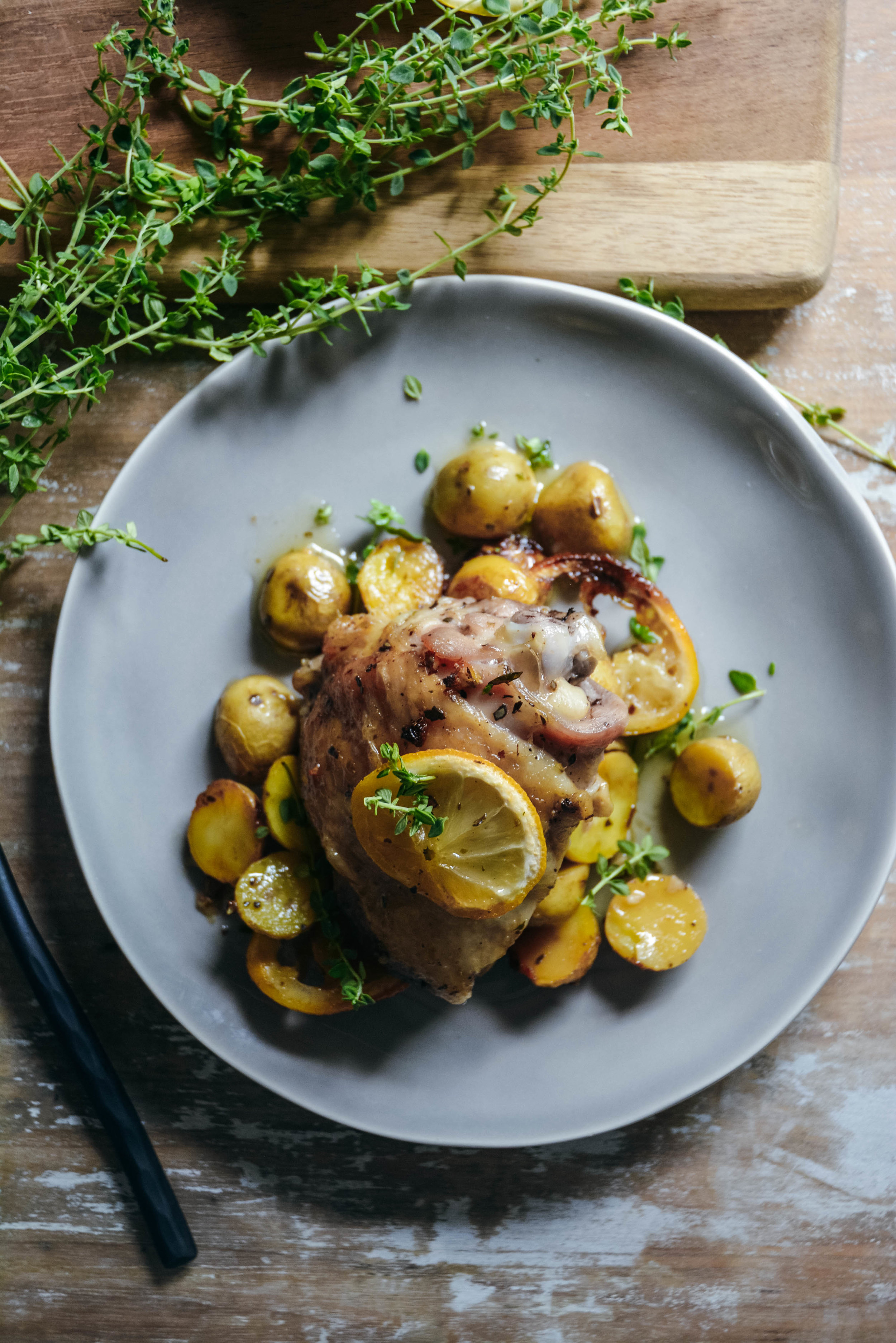 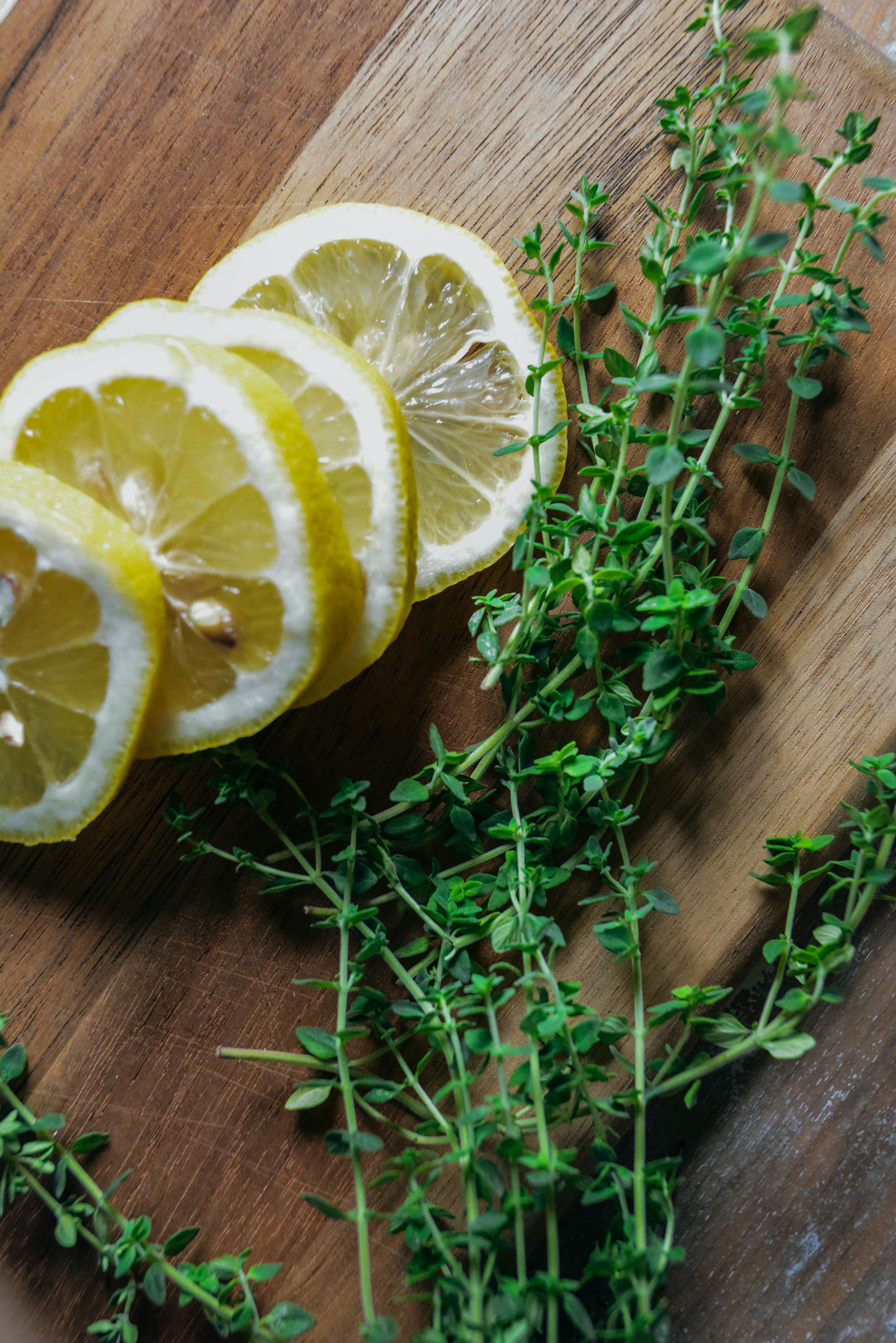 A few years ago my father mentioned that I’m 1/16th Greek. He currently resides in Romania but is completely enthralled with Greece and its culture. So much so that he used my grandmother’s maiden name (which is Greek) on one of his poetry books and does so for most of his writing. He visits Greece as much as possible and likes to share all his adventures and stories through photos, writing or in person. I’m certain that given the opportunity, he would live there permanently.

I see a lot of similarities between Greeks and Romanians. They’re often very honest (even if you don’t like it), loud, talkative, passionate, they love to sing, dance and are all about their food and wine. Though I never had an obsession with Greece to the extent of my father’s, I can relate on a food level and wine level.

On his side of the family, I grew up eating food that was heavily steeped in traditional Greek cooking. My grandmother, a culinary whiz, would spend a good chunk of her day in the kitchen whipping up delicious stews that left the tiny apartment smelling divine. Though meat was often a challenge to obtain, my grandparents had no problem waiting in line for hours only to return home and cook for several more. It’s just how things were done.

Two weeks ago, while doing my weekly shopping, I spotted some beautiful potted thyme. I had no idea what I would make with it but decided it was coming home with me regardless and I would figure it out later. But while watching an episode of Parts Unknown about the Greek Isles several days later, I had my answer. I would without a doubt whip up something Greek inspired – an homage to the 16th of my heritage.

I wanted something simple yet flavorful, involving lemon, oregano and obviously thyme. And also something that required little clean up. The answer was a one pan Greek lemon chicken with baby potatoes. The flavors of thyme and oregano take me right back to my grandparents little kitchen.

There are a few simple steps you can take to make sure this dish turns out perfectly every single time. While simple to make, the chicken can quickly dry.

Marinate chicken for at least 1 hour

I’ve read that marinating any meat particularly chicken for extended periods of time isn’t necessary. I agree but also disagree with this statement. I like to give myself whenever possible at least one hour to let the flavors sit with the chicken. They infuse under the skin, making it particularly crispy and delicious. If I have more time to work with, I don’t have a problem letting the meat sit with the flavors.

I love cooking in cast iron. I’m a firm believer that it enhances nearly every food that’s cooked in it. It adds that certain je ne sais quoi.

Make sure your skillet is nice and hot prior to adding chicken, which should go in skin side down first and get a nice sizzle.

If you don’t have a cast iron pan yet, I highly recommend it. It’s without a doubt one of the best investments I’ve ever made and use it nearly every day. It’s also ideal for transferring the cooking process from stove-top to oven. You may need a pair of strong hands to move it but it’s most certainly worth the weight.

If possible, always look for fresh, organic baby potatoes. They will get a nice crispy outer layer from the lemon, oil and herbs, while the center will remain nice and creamy. Baby potatoes don’t need peeling beforehand, which makes them ideal candidates for this greek lemon chicken dish. Nearly every market sells baby potatoes so you shouldn’t have any trouble finding them.

This is entirely up to you. Oregano is one of the healthiest herbs and I have an abundant stash of dried oregano in my house at all times. Fresh is a bit harder to come by as it’s not always available at my local market. But if you have fresh oregano and wish to use that instead of dried, go for it. The ratio will be 6 tsp fresh instead of the 2 dried. 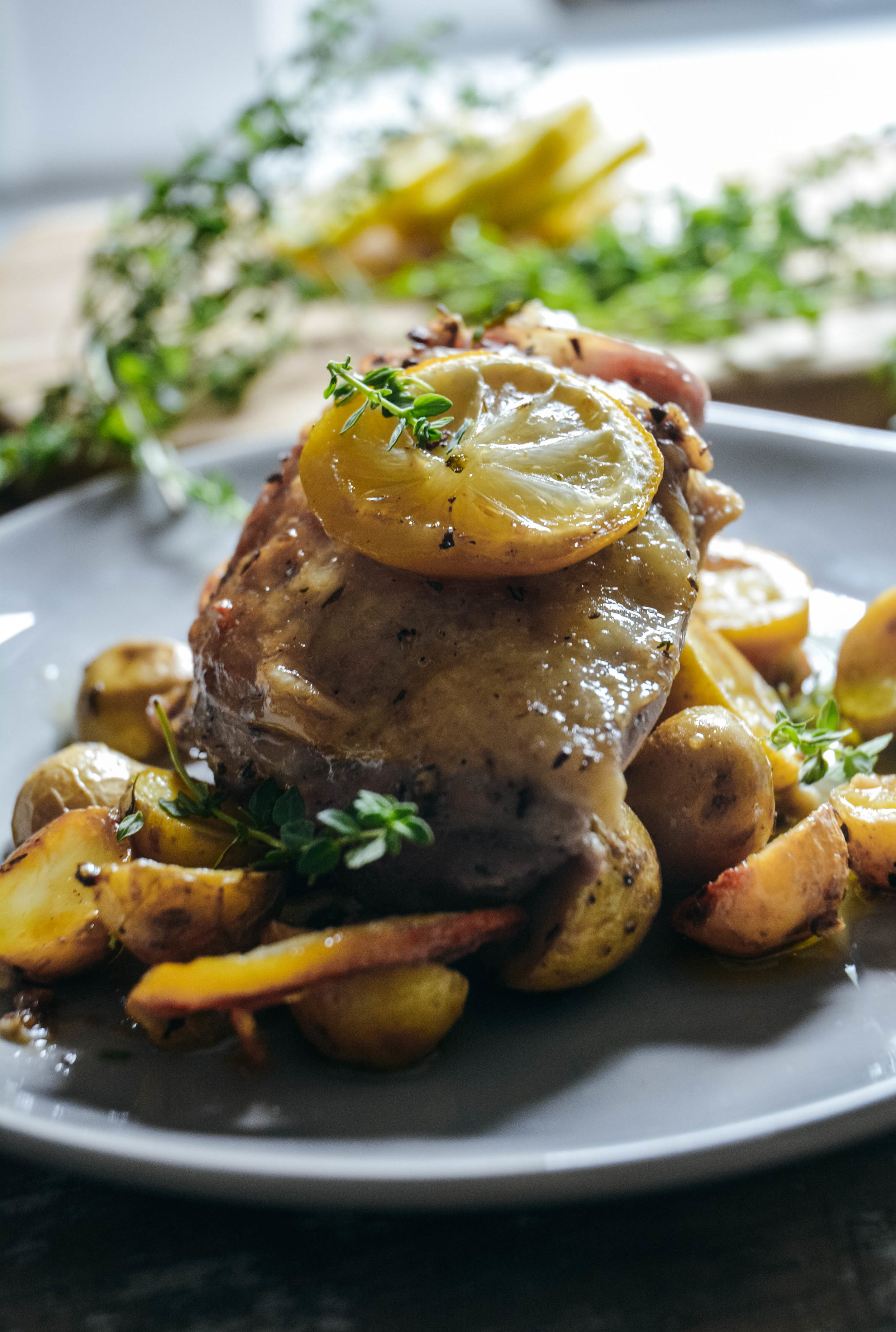 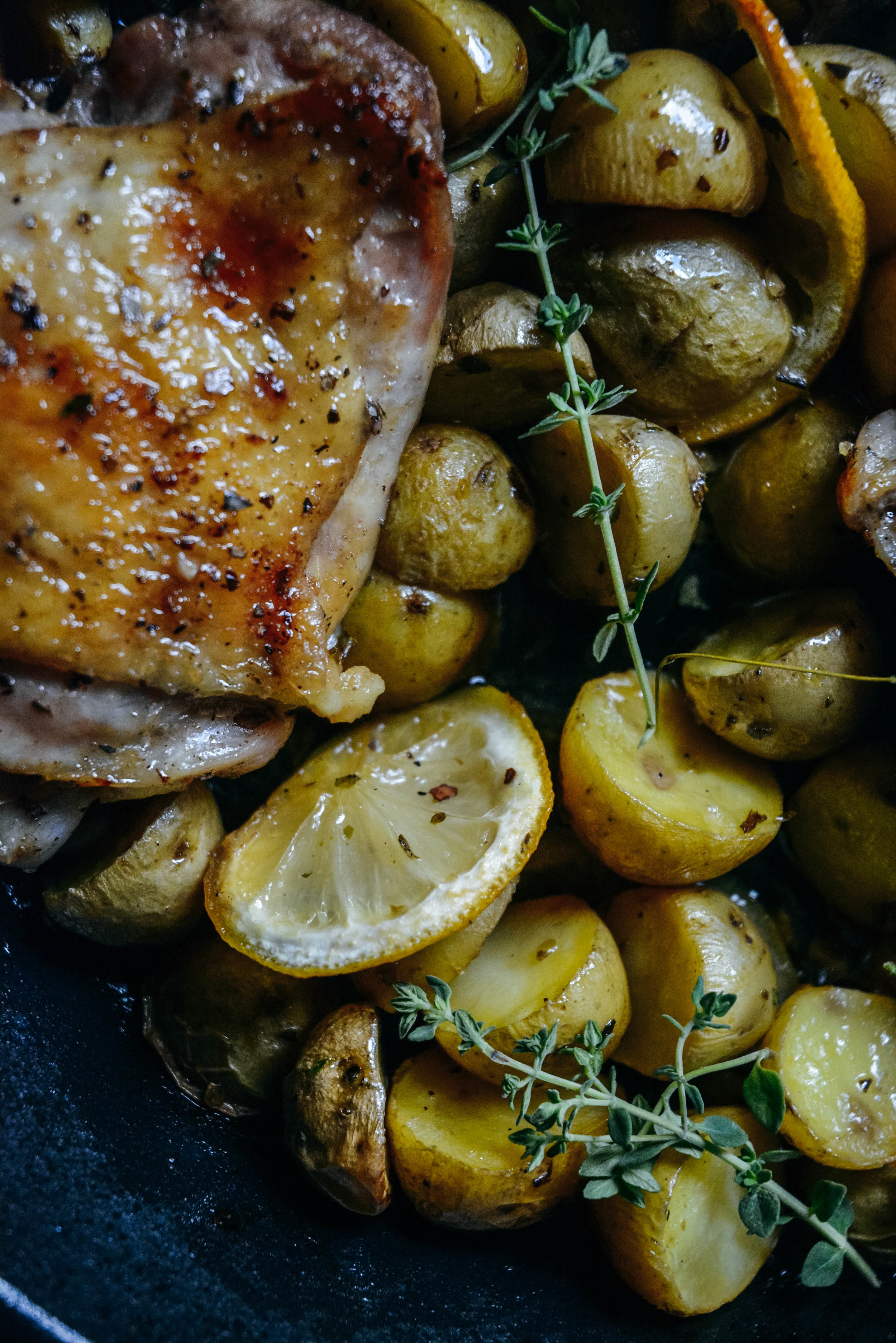 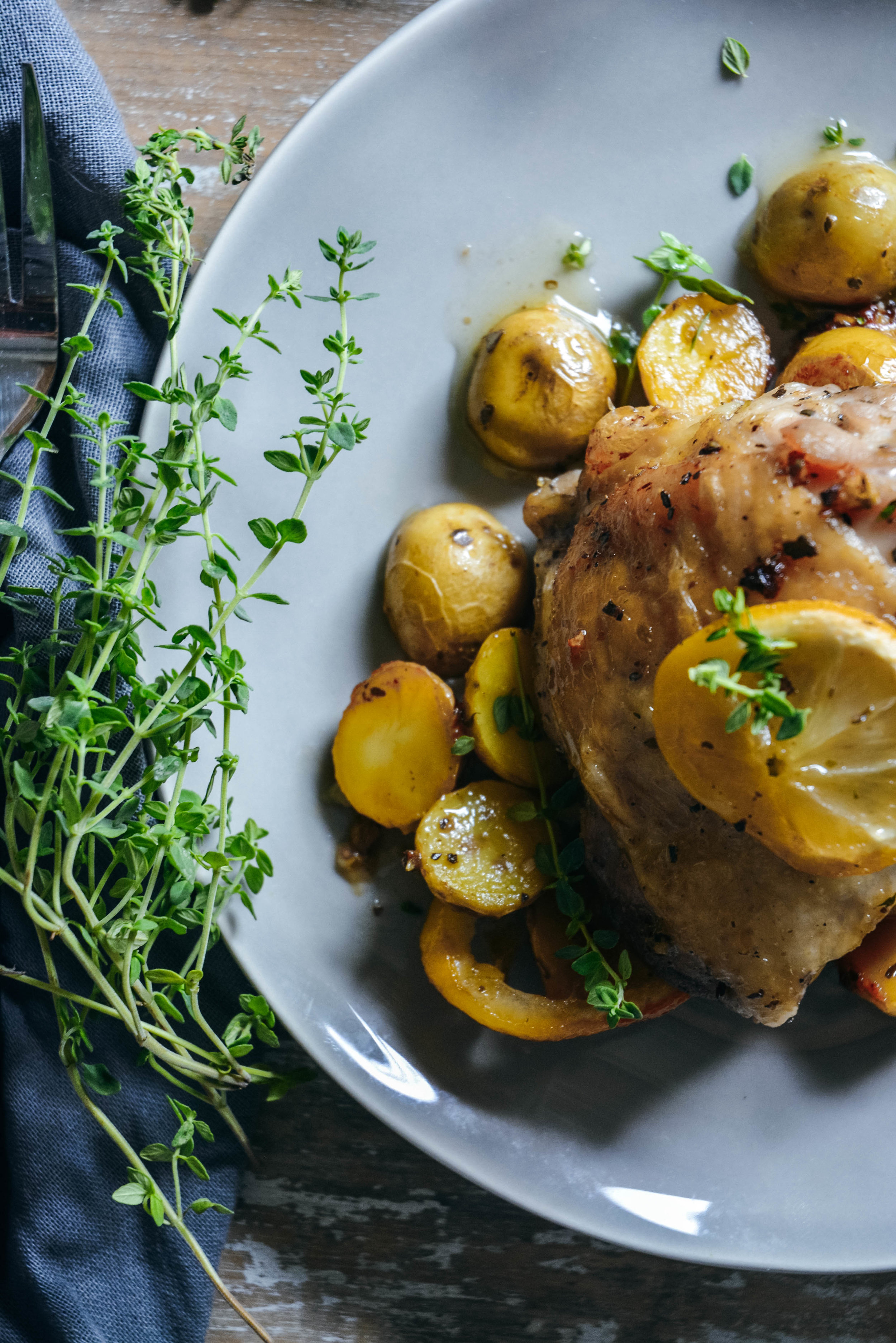