Windows open, birds chirping. A cool breeze ever so slightly tickles my arm. It’s early but bright. The symphony of my feathered companions and occasional hum of distant traffic cut through the silence of the morning.

June mornings are to be cherished. While the July and August heat is still at bay, I take full advantage of fresh air, intoxicatingly sweet bird songs and wallow in the feeling of early summer. There’s a sense of possibility and lightness. Perhaps it’s the connection to childhood when school would end and a liberating feeling would take over. Anything was possible.

I try to carry this lightness through the season and it often spills over into the way I cook. As much as I love being in the kitchen, during summer I’d rather cook outside. I crave food that’s uncomplicated, fresh, flavorful and easy to prepare. Naturally shrimp fits in this category.

Shrimp is versatile and holds up really well on the grill. The secret though is marinate, marinate, marinate! Shrimp itself is somewhat flavorful if properly seasoned but by adding a honey lime marinade to it, just takes it to another level. And sure, you can cook it in a frying pan and won’t be disappointed but there’s something about the flavor of the grill that’s unmatched. Try to limit marinating time to only about 15 minutes because the shrimp will pick up just enough flavor! If you go too long, you’ll end up with overly salty shrimp.

The best way to grill shrimp.

Unless you’re lucky enough to find jumbo shrimp, I generally try and go for large ones and just add them on skewers. You can use the wooden kind, but I’ve actually invested in metal ones that can be reused. Less waste is always a plus.

The best match for shrimp

To go along with the shrimp, I’ve decided to throw some pineapple on the grill and add another level of sweetness. Sprinkling the pineapple with salt right after it has finished grilling will tie the whole dish together by balancing the sweetness of the pineapple.

You can serve these honey lime grilled shrimp over rice, quinoa or cauliflower rice or pick any other side you prefer. I find those to be the best matches for shrimp though.

Don’t forget the lime and cilantro

Since you do end up losing some of the flavor of cilantro and lime in the grilling process, I like giving the shrimp a squeeze of fresh lime and add additional fresh chopped cilantro – not just for presentation but for adding some extra freshness after the shrimp are grilled.

Combine all ingredients except for 1 tbsp olive oil and pineapple in either a container or Ziploc bag and combine well. Let marinate for 15 minutes.

Preheat grill to medium-low. Peel and core pineapple and cut into slices. Brush both sides with olive oil and grill for 6 minutes per side. Sprinkle pineapple with salt if desired. Add shrimp to skewers and grill for 3-4 minutes on each side.

You can serve over rice or cauliflower rice. 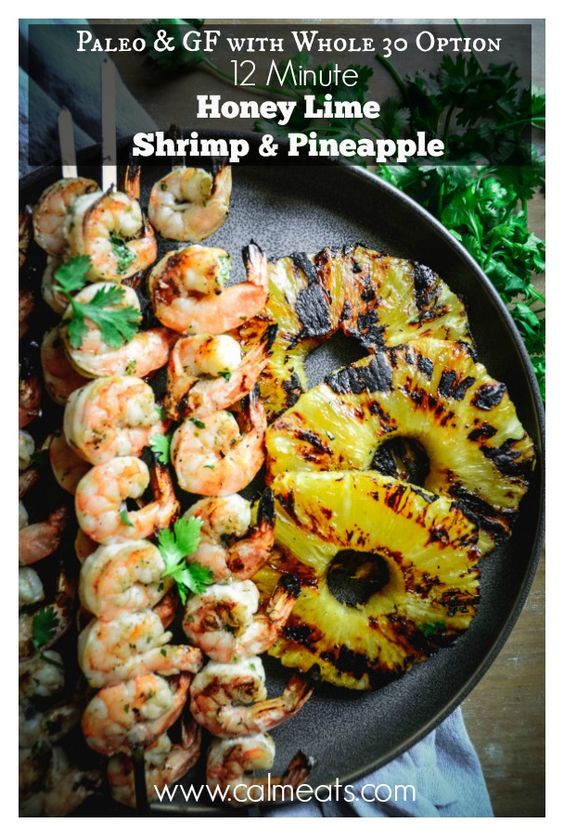